Saudi Aramco undertakes an unprecedented geological task on the Kingdom’s West Coast as we look to first understand, and then uncover, the treasures buried beneath the waters of the Red Sea.

The task of mapping the seabed was colossal. Almost a decade ago, Saudi Aramco made the decision to conduct the world’s largest single hydrographic survey in the Saudi Red Sea waters — an area of almost 200,000 square kilometers (km2).

Prior 2-D seismic data acquisition had revealed positive signs for the presence of hydrocarbons in geological traps. Just like the Eastern Province in the early 1940s, the Red Sea was frontier territory — unexplored. Its development would be a catalyst to spur growth and industry in the Western Region.

A large-scale hydrographic survey — never before done in these historic waters — was required to fully understand the seafloor conditions. The hydrographic survey with its close grid analysis would help support all oil field operations, including rig movements, laying of pipelines, oil field facilities, and the routes for supply vessels.

“We got a good understanding, but lacked the topography of the seabed,” noted Saleh A. Al-Maghlouth, manager of the Exploration Operations Department. “So we undertook this groundbreaking hydrographic survey to help us better understand the structures and where to drill.”

The challenges were many

“The major concerns were the time constraints and vessel safety,” observed Richard G. Moffitt, Exploration Survey Unit consultant. “These were hazardous, shallow areas previously uncharted. In fact, there were old navigation charts in existence, but from several decades ago and at low resolution — insufficient for present-day vessel navigation for exploration projects. Historically, there were many more shipwrecks in the Red Sea than there were navigation charts.”

Conventional technology at the time utilized echo sounding as a means to map underwater topography, but this would have taken many years to complete. So instead, Saudi Aramco put at its disposal the latest technology available to get the job done.

What followed were 848 days of survey operations. Five specially equipped ships would spend a combined total of 2,823 vessel days using a multi-beam echo sounder to collect data for water depths between 5 meters (m) and 2,400 m. This technology was supported by three aircraft using Airborne LiDAR Bathymetry systems for water depths between 0 m and 40 m, with a combined total of 1,260 survey flights completed.

The results were a new high resolution merged bathymetry grid allowing the mapping of complex geological features, including volcanoes on the seabed.

The data was encouraging for Saudi Aramco. The company was now able to move offshore rigs around and initial exploration could begin. But technology never stands still.

Previous 2-D seismic data had been compromised in certain sections due to the unpredictable seabed topography of the Red Sea. If plausible, a 3-D seismic survey would deliver more definitive and detailed data, and combined with the hydrographic survey, it would yield immensely useful information with a high degree of certainty.

Just how do you image in a 3-D sense a geology as complicated as that found in the Red Sea? It was a puzzling question for geologists. Within a short distance, depths can vary from just a few meters to a few hundred meters. In addition, the area is salt dominated, with shallow carbonate on the seabed, and deep targets below salt layers of variable thickness — making any seismic operation challenging.

“We required a novel approach — something never used before,” said Azizur R. Khan, geophysical consultant with Saudi Aramco’s Geophysical Data Acquisition Division (GDAD). “We found four potential technologies, but we would have to test them. They had never been tried in an arena like the Red Sea, so we did our research and put them to the test.”

After rigorous analysis lasting almost a year, all the technologies delivered promised results — but one stood out for its efficiency and data quality: the Marine Autonomous Seismic System (MASS).

Utilizing a node-on-a-rope based system, MASS uses reinforced armored rope with a 20-ton breaking strength to place nodes on the seabed. In addition, its robotized mechanism for deployment and retrieval would add efficiency to the operation.

The MASS nodes can operate in both shallow and deep waters ranging from 1 m up to 3,000 m, utilizing one hydrophone and three omnidirectional geophones to optimize the data capturing range. Incredibly, the nodes are able to stay on the seabed for up to 65 days thanks to advanced battery life technology. In addition, high-fidelity seismic signals provide excellent imaging beneath salt formations.

So successful was the technology that it eventually cut costs of the acquisition by 40%. 3-D seismic operations were now viable in the Red Sea. For Saudi Aramco, it was all systems go.

We required a novel approach — something never used before

“We have a challenge making sense of all this data,” observed GDAD’s Hussain N. Al Ghanim. “But we work closely with the geologists and other partners across Exploration to interpret what we have — it’s not easy, but we get there.

“Everything about this operation amazes me, but what stands out the most are the nodes on the seabed floor,” he continued. “They are able to stay at such depths for more than a month at a time storing and collecting data. The speed is incredible and it’s a true breakthrough in seismic. Combined with our computing technology, data that would have taken us years to acquire and process now takes only months — what a leap.”

The 3-D seismic operation in the Red Sea is yielding unprecedented results. The Kingdom and Saudi Aramco’s vision are in full swing in this region, and 3-D seismic is at the heart.

Taking care of the environment

The Red Sea is home to some of the planet’s most incredible marine life. It has been described by English veteran broadcaster and naturalist, Sir David Attenborough, as being both “beautiful” and “flamboyant,” and judging by its inhabitants, it’s little wonder why.

Its majestic colored coral reefs flourish just beneath the surface in shallow waters. But their purpose goes beyond just aesthetic pleasure — they are vital components of a thriving local ecosystem. Deeper down, 10% of the Red Sea’s recorded 1,000 species are of fish found nowhere else on the planet. Due to its unique geological DNA, the Red Sea has been described as an “oceanin-the-making” by scientists, which is why many believe that ongoing research in its waters will help find answers to burning questions regarding the world’s oceans. 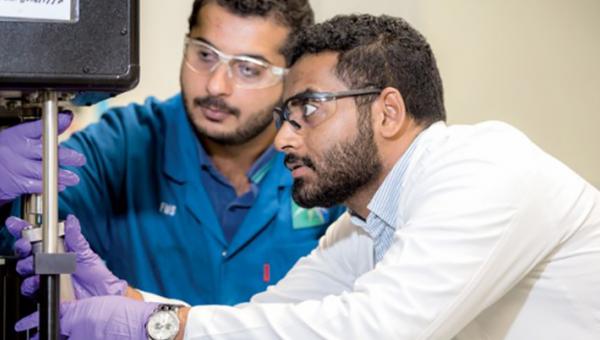 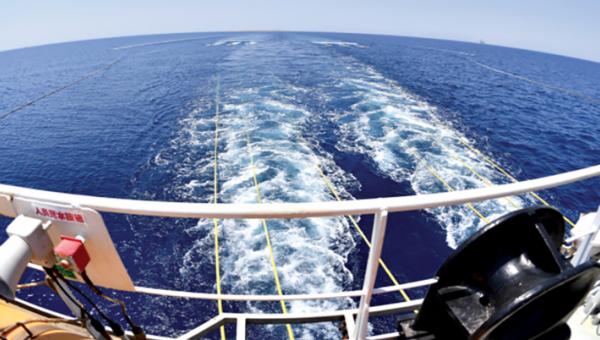 Saudi Aramco undertakes an unprecedented geological task on the Kingdom’s West Coast as we look to first understand, and then uncover, the treasures buried beneath the waters of the Red Sea.